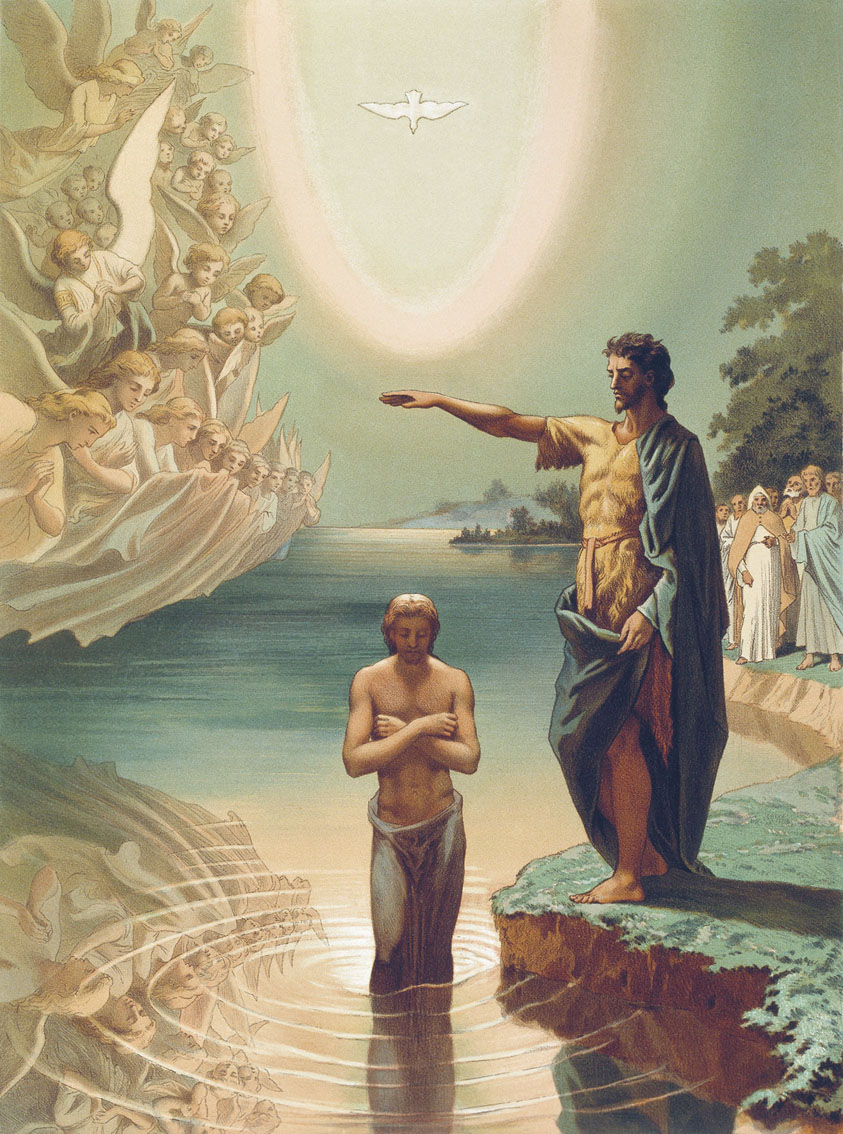 Mark 1:9  And it came to pass in those days, that Jesus came from Nazareth of Galilee, and was baptized of John in Jordan. 1:10  And straightway coming up out of the water, he saw the heavens opened, and the Spirit like a dove descending upon him.

The Gospel of Mark was the earliest Gospel written of the 4 canonical Gospels. As such, it’s generally accepted that it is the closest to “original” Christianity as we have access to. The reason why this Gospel opens right away on the “scene” where Jesus is baptized by John is because this is the moment that Jesus become Christ.

I know that this will seem like blasphemy to almost everyone who reads it. We’re taught that “the Son” / Christ / Jesus has existed since the beginning, along with “the Father” and “the Spirit.” However, this was not the original belief of most Christians.

Now, I could go all down Dan Brown on you with an explanation of church councils and emperors and politically-driven religious decision-making, but all of that is available in longer and more detailed formats than a blog post. (I suggest, for example, How Jesus Became God.) Instead, I invite you to consider this with your hearts and your minds…

The description of what happened to Jesus when he was baptized very clearly describes a moment of mystical enlightenment. Literally, when Jesus is baptized, the Spirit of God descends upon and into him. He now becomes an anointed one, a Christ.

Just think for a moment upon the convoluted explanations that are necessary to try to make sense of the Trinity:

And in one Lord Jesus Christ, the only-begotten Son of God, begotten of the Father before all worlds, Light of Light, very God of very God, begotten, not made, being of one substance with the Father … who for us men, and for our salvation, came down from heaven, and was incarnate by the Holy Ghost and of the Virgin Mary, and was made man … And in the Holy Ghost, the Lord and Giver of life, who proceedeth from the Father, who with the Father and the Son together is worshiped and glorified, who spake by the prophets. (Nicene Creed 381 A.D. modification)

Three gods, one God; all equal, but not the same, but of the same essence, sometimes timeless and sometimes in-time. In the original Nicene Creed, the Holy Spirit (Ghost) gets a one-line mention at the end: And we believe in the Holy Ghost. That’s it.

All of these machinations seemed at the time to be necessary to explain the depictions in the Gospels and the Acts of the Apostles — but we must keep in mind that this was a time when most people were not trained to think in abstract terms. Thus, there needed to be a concrete explanation for the relationship between God, Jesus and this mysterious “Paraclete” (helper) that shows up every once in awhile in the form of a Dove.

What if all of this happened today? What if, when Jesus says “The kingdom of God is within you” (Luke 17:21), we actually believed him? What if we stripped away all the trappings of the “orthodox” view of Jesus’s message and instead just take a new look? What if Jesus found communion with God in the act of being baptized, then withdrew to the desert to deal with his new-found revelations? What if the Holy Spirit is just a name for a deep relationship with God?  What if everyone can be anointed?

Before you run away in horror, let’s look at actual New Testament quotes which support this notion:

(Jesus said) I am going to send you what my Father has promised; but stay in the city until you have been clothed with power from on high. (Luke 24:49)

The wind blows wherever it pleases. You hear its sound, but you cannot tell where it comes from or where it is going. So it is with everyone born of the Spirit. (John 3:8)

Be ye therefore perfect, even as your Father which is in heaven is perfect. (Matthew 5:48)

These quotes come from the “orthodox”-approved scriptures; even more evidence exists that this was Jesus’ original meaning in the so-called apocrypha.

I think I’ve given you enough to contemplate for now.

A list of books you may find interesting if you want to learn more about the topics covered here.  Click here